From Âventiure Novels to Adventure Games: Adventure Narratives in Popular Images and Texts 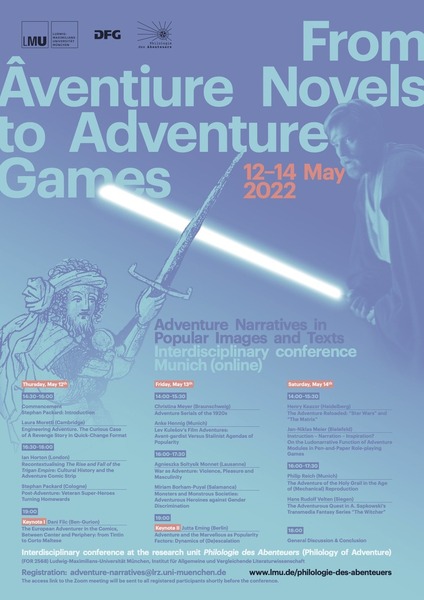 Organizers: Stephan Packard (Mercator Fellow: “Adventure as a Popular Nomad: Transformations of Adventure Narratives in Comics“ and Philip Reich and Michael Waltenberger (Project 2b: “Transcendence as Enhancement and Opposite Pole of the Adventurous“).

How popular was adventure?
Medieval âventiure built a model of heroes traversing limits and journeying to wonderful and dangerous encounters. In many European languages, the term adventure has since referred to complex motifs and structural patterns that have sedimented in various genres, but are documented to have existed at least since early antiquity, with the effects of these traditions continuing to the present day. As we bring together historically remote phenomena under the paradigm of adventure, we may discover dimensions of similarity beyond structural analogies: the always already transmedial diversity in linguistic, pictorial, performative, and interactive forms of communication; the appeal of adventure that shifts between an explicit address to broad audiences and an implicit commitment of audiences to episodic arrangements and serial continuities; and the recognisability, transformability and recombinability of certain episodes, motifs, and mythologies in ever newly continued and retold series of adventurous confrontations and experiences.

The interdisciplinary conference Abenteuererzählungen in populären Bildern und Texten (Adventure Narratives in Popular Images and Texts) at the research unit Philologie des Abenteuers (Philology of Adventure) aims to fathom the comparative potential of this heuristically broad spectrum. We want to open up for discussion some cultural and historical concepts whose scope might have been too hastily limited in previous research: extending the concept of the popular beyond long European modernity; taking heed of the multimodal communication as well as the transmedial relations always already involved in adventure narrative; and tracing the recombinations, performances, and interactions that move and assemble adventure motifs in various media and genres. We want to explore these and other questions in an interdisciplinary discussion between the medieval and the modern and between philologies, art history and media studies.

The conference will be held on Zoom.
Registration: adventure-narratives@lrz.uni-muenchen.de
The access link to the Zoom meeting will be sent to all registered participants shortly before the conference.